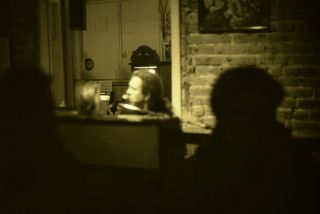 this is a foto taken @ the tricou house [711 bourbon street, new orleans] where i worked for quite a few years. back in the day, when i worked there [circa 1989- early 1990s] the piano was right in the front door! in this pic, i am looking out onto Bourbon Street instead of at the audience; but there was always a show going on outside.

during mardi gras it was a madhouse... jam packed and totally insane... an absolute circus! [which is why i am thinking about it- it's mardi gras time]

i have a lot of good memories from my time there. it was a great life experience. many ideas for my song lyrics were inspired by things i witnessed and heard and were incubated, in that bar. par example:

HOME SWEET BOURBON STREET [DOUG DUFFEY]
From the carnival of canal, the fast food boom-box fare
To the old oak shade of esplanade and the elegance up there
Lies a neon sleaze arcade where the out of towners meet
In a 24 hour parade down on home sweet bourbon street

Black boys tap dance for spare change, others sing the blues
They'll say "I can tell you 'bruh', where you got them shoes"
Well that’s as easy as crawfish pie, you got them on yo' feet
In the heart of new orleans down on home sweet bourbon street

Dealers, debutantes and drags, chile, you just never know
Who is who and who is what and what they’ll do for dough
'Cause anything and everything goes and no one is discreet
You can be yo' natch’l self down on home sweet bourbon street

Girls or boys may ask you if you want to party down
Next day you may be found face up, or down river drowned
You cant never be too careful of the folks that you might meet
Cause you could easily buy the farm down on home sweet bourbon street

My Other Blogs & Shops

this is my music and music news blog. this is where i post fotos, blurbs, links etc. from and about my upcoming or recent gigs; whatever is relevant to my music biz. it's usually quicker/easier than re-vamping/adding to my website;
for the more "in depth" stuff [information: biography, discography, places i've played, info about my cds, sound clips, contact info, etc] there is my original website: www.dougduffey.com

all my online music is also available through cdbaby,
iTunes, amazon etc.

for some foto galleries, sound clips, current and recent on-going stuff there is: www.myspace.com/dougduffey

to see my performance videos [with band and also solo] see :
http://www.youtube.com/DougDuffey

many thanks to all of you who visit this site and who support my music!